After the Sons of Liberty dumped thousands of pounds of tea into Boston Harbor in 1773, patriots were faced with a difficult question: just what were they going to put in their teapots now? Since they could no longer in good conscience buy the taxed Bohea tea brought in by the British from China, they maintained that the solution could be found in America’s own native plants.

“If we must, through custom, have some warm tea, once or twice a day,” wrote one Pennsylvania author, “why may we not exchange this slow poison, which not only destroys our constitutions, but endangers our liberty, and drains our country of so many thousands pounds a year, for teas of our own American medicinal plants.”

Soon, several varieties of “Liberty Tea” appeared in teapots throughout the colonies. Many blends featured common kitchen herbs like thyme, sage, and rosemary.

Several others, however, came from wild plants used for centuries by American Indians who passed on their knowledge to the colonists.

After independence, many of these plants were no longer cultivated, although they continued to flourish in the wild. Hardy, beautiful and useful, they are worth rediscovering today.

The most popular of all the ear’s tea substitutes was New Jersey tea (Ceanothus americanus), also known as redroot, which came closest to approximating the flavor of imported tea. Many native tribes, including the Dakota, Pawnee, and Winnebago, used the leaves and roots of the plant for tea, medicine, and dye.

A member of the Rhamnaceae, or buckthorn family, New Jersey tea is most recognizable when in bloom. From late summer to fall, it produces thick panicles of tiny, fragrant white flowers.

Unlike the flashier varieties of the genus—the California natives known as white lilacs—New Jersey tea is hardy and disease resistant, and it can thrive from sun to part shade and even in difficult areas like dry slops.

The leaves are most flavorful when the plant is flowering. A cup of tea can be prepared from the fresh leaves, but the usual method is to dry them, either in a low oven or inside in a warm, well-ventilated place.

Use about a teaspoon of the dried leaves per cup, as you would black tea. Unfortunately, New Jersey tea contains no caffeine, but it still makes a lovely drink. 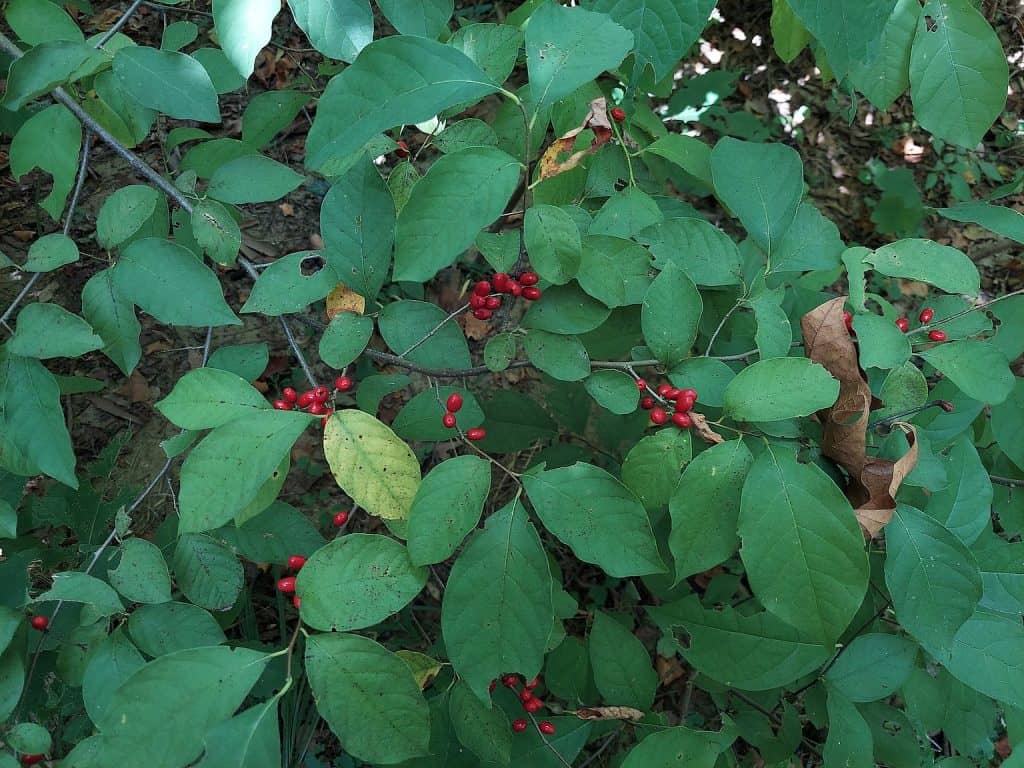 Spicebush (Lindera benzoin) provided colonists with two very different teas: one from the leaves in the summer and another from twigs in the winter.

Spicebush is dioecious, and the female shrubs bear this plant’s most noticeable feature— berries that turn scarlet in early fall. More than twenty species of birds eat the peppery berries, and the shrub hoists the beautiful spicebush swallowtail butterfly.

Often found at the edge of forests, spicebush prefers partial shade. It offers early spring flowers and lovely golden foliage in the fall. To get berries, make sure you plant spicebush shrubs of both genders. Look for plants in bloom at the nursery; the male and female plants have different flowers. Either gender, though, will provide you with tea year-round.

To prepare a delicate, citrus-tinged iced tea, crush the leaves slightly and soak them in room-temperature water for a few hours, then chill the brew and sweeten to taste.

In the winter, snip off a few of the twigs and cut them into roughly inch-long pieces. Pour hot water on them and let steep for about 15 minutes. With hints of cinnamon, allspice, and mint, it is an invigorating, woodsy beverage that will make you forget all about the teas shipped from halfway around the world. 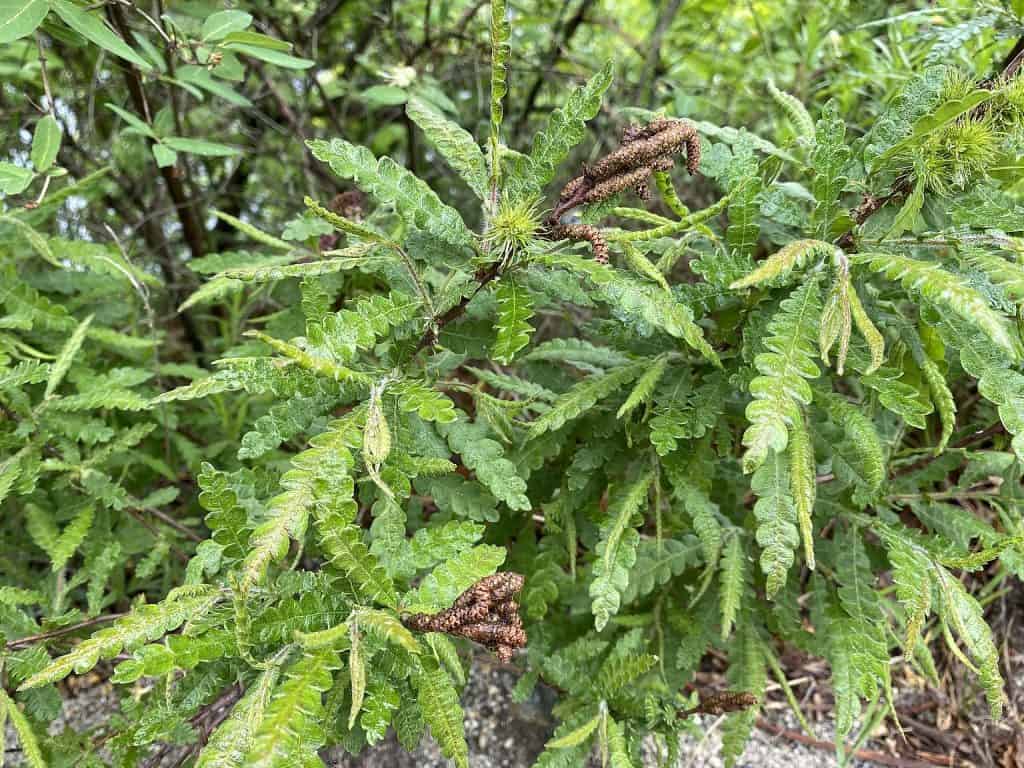 When I lived in Massachusetts, I would often find sweet fern (Comptonia peregrina) on my walks on the Minuteman Trail. The revolutionaries might have noticed it growing around them as well.

The American Indians certainly knew the plant well: Chippewa brewed sweet fern tea, and the Potawatomi would throw fronds on the fire for an aromatic, mosquito–repelling smudge.

Sweet fern can tolerate poor and disturbed soils as well as partial shade, which makes it particularly useful for difficult planting area, like along walkways and driveways. Although sweet fern can grow up to five feet, it generally stays much smaller—in my experience, about two feet high.

Its beauty only becomes apparent if one bends down to examine the unusual fronds and inhale the subtle aroma, which is particularly noticeable on warm days.

Soaking a few of the long fronds, crushed, in room-temperature water for an hour or so will create a fresh sun tea. Dried fronds can be used to make hot tea—about one frond per cup. Only steep it for a minute or two to preserve the plant’s delicate flavor. 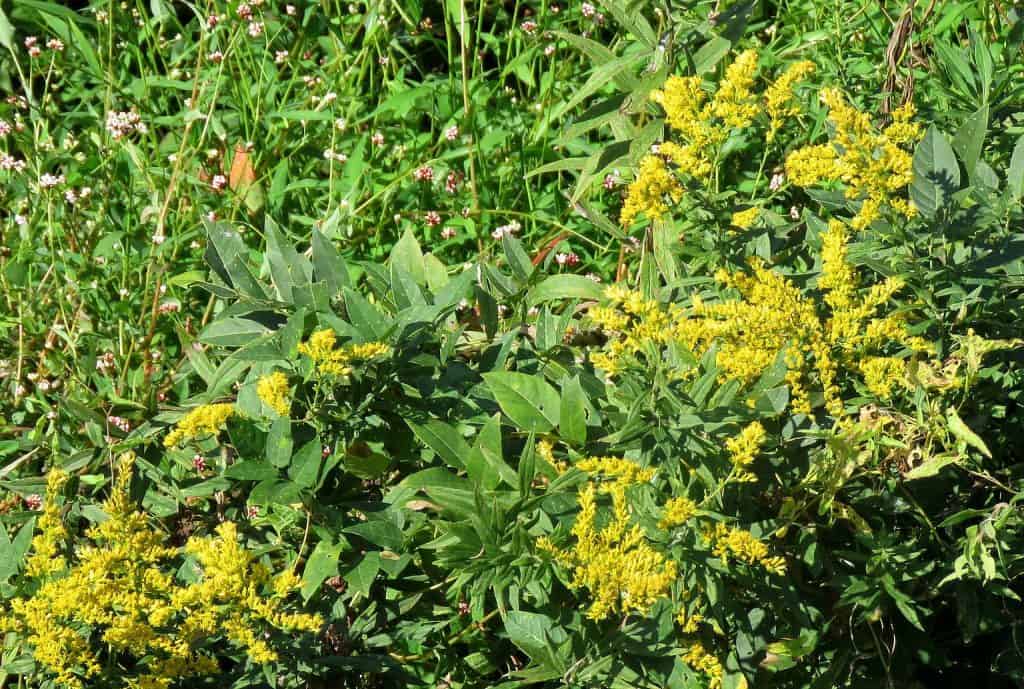 All the varieties of goldenrod (Solidago spp.) make pleasant teas, but anise-scented goldenrod (also known as sweet goldenrod) is by far the tastiest.

Solidago odora can be distinguished from its more common wild brethren by crushing a leaf and smelling for licorice. As hardy as other goldenrods and found throughout North America, it boasts the virtue of not spreading as aggressively in a garden.

A tea can be made from fresh leaves or dried flowers and leaves. Goldenrod tea has long been regarded as a medicinal, and the Cherokee used infusions of the plant against coughs, colds, and fever.

With its wonderful aroma, it was one of the most popular ingredients in the Liberty Teas and even became one of colonial America’s earliest exports. 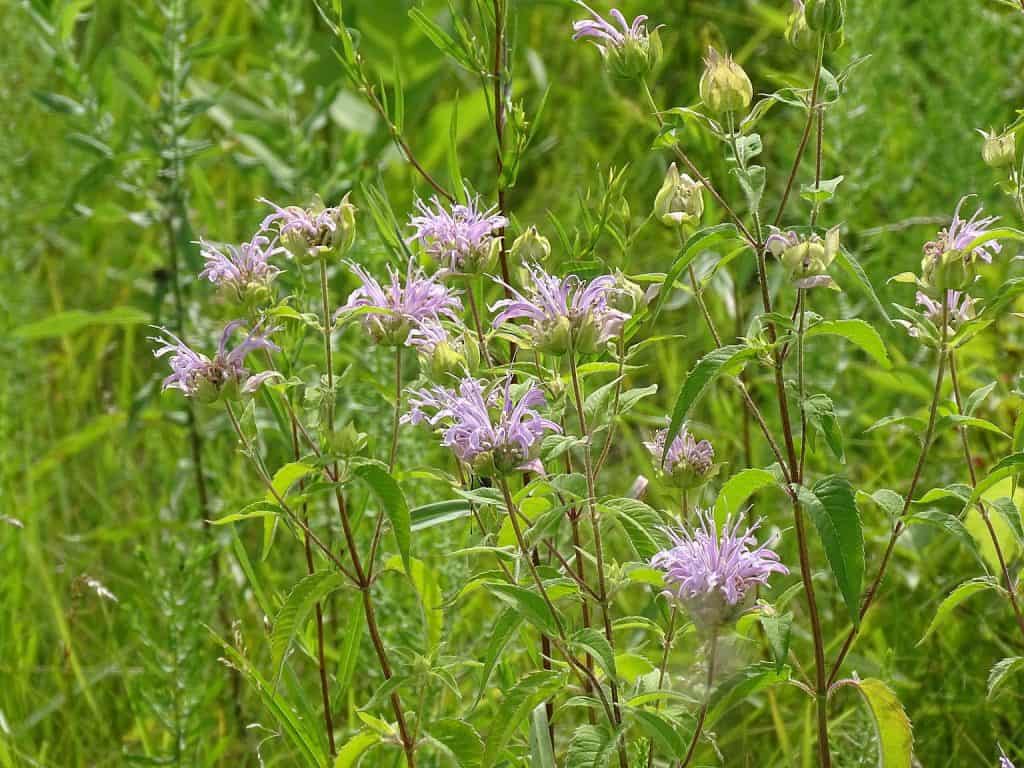 A wildflower in the mint family, bee balm (Monarda fistulosa), is widespread and abundant in North America. The plant is easily recognizable thanks to its showy summer-blooming pink to lavender flowers.

You can look for this plant during the flowering period, from June to September, in dry fields, thickets, and clearings. Its compact flower clusters are solitary at the ends of branches and can be easily spotted.

Bee balm has a long history as a medicinal plant, and the Native Americans, especially the Menominee, the Ojibwe, and the Winnebago (Ho-Chunk) nations, were using it extensively to treat colds and the flu. The plant has a strong antiseptic action, and it was often used for mouth and throat infections caused by gingivitis and dental caries.

To make a tea, use 1 teaspoon of dried bee balm leaves per 1 cup of boiling water. The tea has a strong flavor similar to Earl Grey tea, and you may want to sweeten it with honey. For a lighter flavored tea, I recommend using half of teaspoon of leaves. 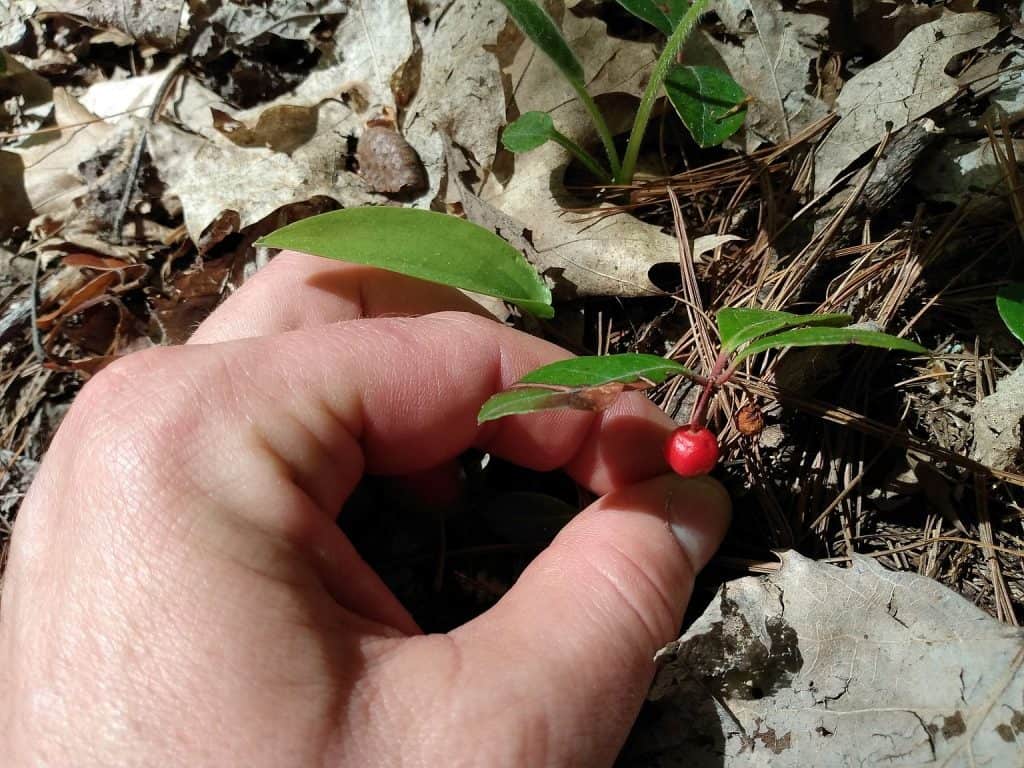 This low-growing shrub with evergreen leaves is widespread in northeastern North America, and it can be difficult to spot due to its small size of 4-6 inches. However, it’s elliptic to ovate, long and broad leaves have a distinct sweet and fruity scent similar to root beer. Another distinctive feature is the red fruits that look like berries that are edible, and in some regions, you may have to compete with the local fauna to get the fruits.

Wintergreen (Gaultheria procumbens) was used by Native Americans mainly as a medicinal plant because the leaves and berries contain methyl salicylate, a compound closely related to aspirin. The plant thrives in acidic soil so look for it in pine or hardwood forest.

To make wintergreen tea, you have to first allow the leaves to ferment in water to release the essential oil. To do so, place a handful of leaves in a glass jar and cover them with water (preferably chlorinated-free water). Place the lid on the jar and let it sit on your counter or any other war area in your home for 3 days. After 3 days, you should see bubbles forming, and then you can strain the tea and warm it gently to a drinking temperature. 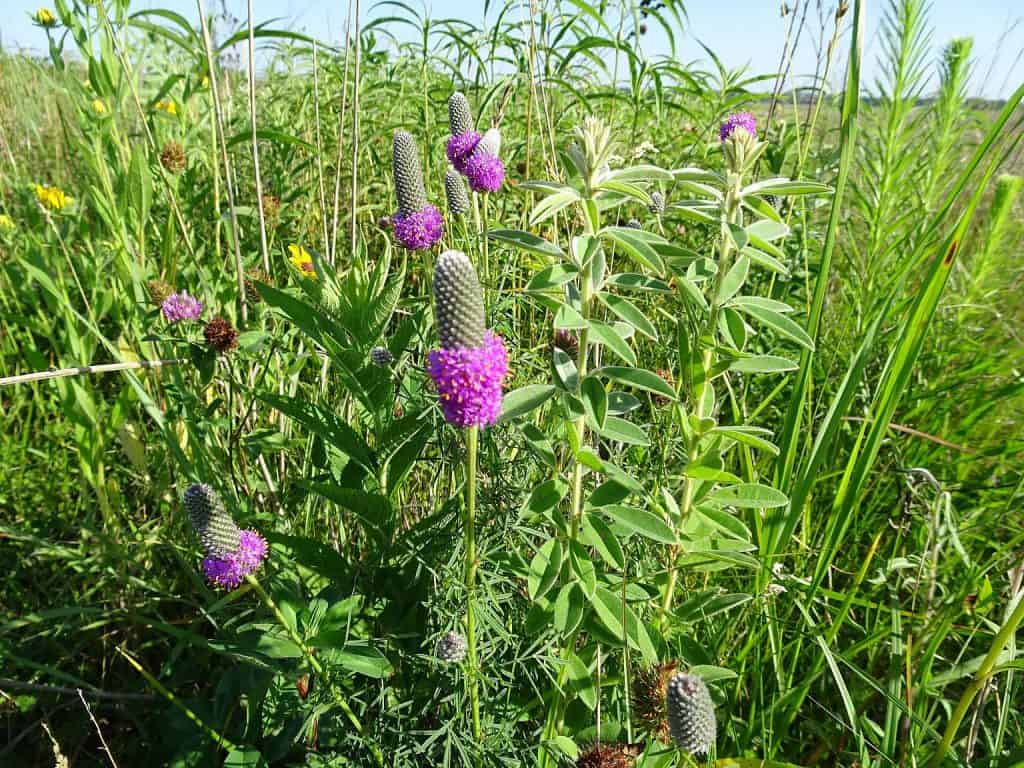 The purple prairie clover is native to central North America and is widespread in the Great Plains and prairie ecosystems. This perennial herb can grow 8 to 35 inches tall, and it can be recognized by its spikes of bright purple flowers.

Purple prairie clover (Dalea purpurea) is a highly nutritious plant that provides excellent forage for livestock and wildlife, but it was also used both as food and medicine by the American Indians. The leaves are edible fresh, and they can also be used for tea making, either fresh or dried. The large taproot is also palatable, and the Pawnee tribe used to chew the roots for their sweet taste, similar to store-bought candy.

You can make tea using a handful of fresh leaves and blossoms to a cup of boiling water, or you can use dried leaves, 1-2 teaspoons per cup of water. The tea has a pleasant, sweet flavor, and it doesn’t require sweetening, especially if you use it for medicinal purposes. 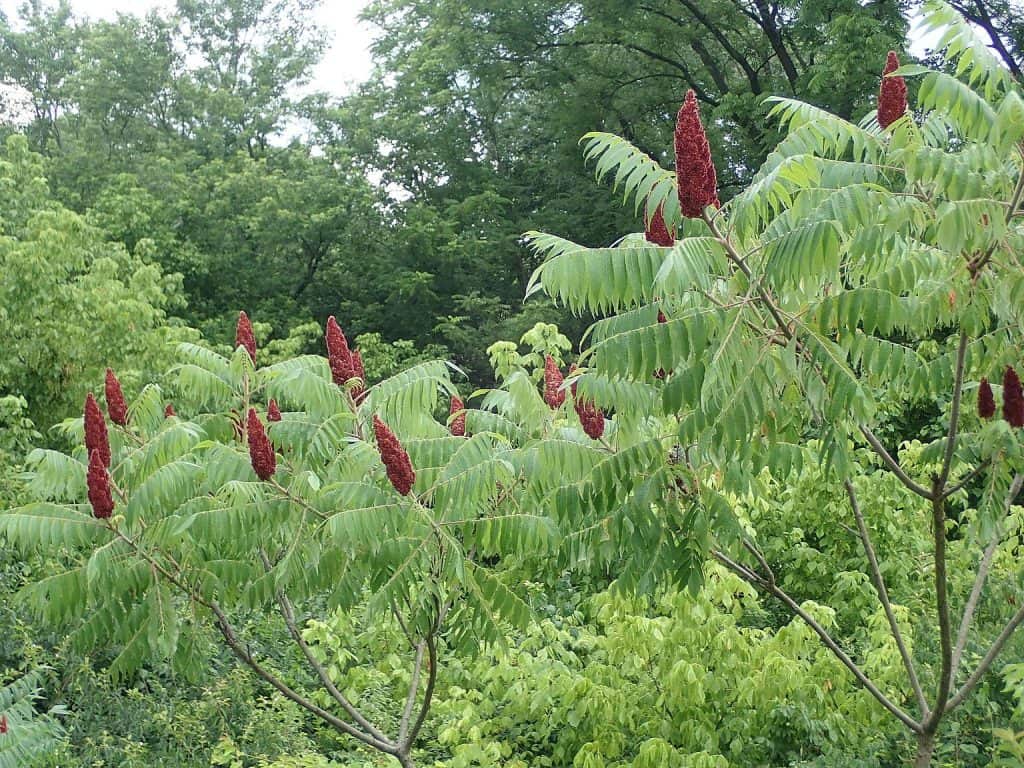 This deciduous shrub or small tree can be found in the northeastern and midwestern United States and the Appalachian Mountains. However, it’s also widely cultivated as an ornamental or as a natural dye and mordant. 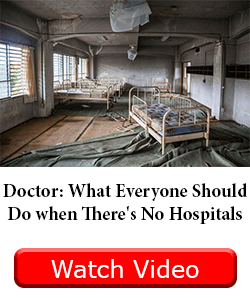 The plant can be easily identified due to its pinnately compound leaves, which are 10–22 inches long and change color in the fall from green to red, orange, and yellow, and thanks to its reddish berries that occur in dense, terminal infructescences.

The berries of staghorn sumac (Rhus typhina) are edible, and the Native Americans used them to make lemonade. They would soak and wash the berries in cold water, strain and sweeten the pink liquid to make what’s known as “Indian Lemonade.”

The berries can also be used to make a delicious, high vitamin C tea. You will need to pick a few clusters of berries (3-5) and place them in a jar. Crush the berries to help release the flavor and add fresh, cold water. I usually let the berry soak overnight to obtain a stronger flavor.

Strain the liquid through a coffee filter or cheesecloth, and you can drink it cold, or you can warm it gently, but keep in mind that boiling the tea will destroy vitamin C. You can also add sugar, honey, or other additives of your choice to suit your taste.

The native plants listed in this article were used for making tea long before commercial tea was available for our ancestors, and you can put them to good use when you run out of your favorite brand of tea. Making tea from native plants is quite easy, and the most challenging part, in my opinion, is being able to correctly identify the plants to be used for tea making.

Useful resources to check out:

Source
Making Tea From Native Plants is written by Bob Rodgers for prepperswill.com