A Few Reasons To Get A Mule For Your Homestead

I’ve officially put both feet in the stirrups of the equine world. In the last year, I’ve purchased two mules. Both animals are very different and at different levels of training. The first is what is known as green broke, and the other is totally unstarted.

I weeded through many options during the buying process. I had some prior experience riding horses, but I’ve never owned an equine, much less a mule. I didn’t know what to look for in a good mule, and I didn’t even know what made a mule “good” in the first place.

There are no definitive mule-buying guides. This is the knowledge that’s been replaced with information about buying used cars from Craigslist and laptops from Amazon.

The learning curve is steep when buying a mule. It can be a major headache if you buy an animal that isn’t right for you. However, I navigated the process, and I’m now reaping the consequences of my acquisitions—good and bad.

What Makes a Mule

The main idea to consider is why you would want a mule rather than a horse. A mule is a hybrid cross between a female horse and a male donkey. They are sterile, meaning a mule can’t produce offspring.

The term “heterosis,” or “hybrid vigor,” describes exactly what happens in the making of a mule. In a mule, you get the best traits of two very different animals: horse and donkey.

Charles Darwin summed up the benefits of a mule best, “The mule always appears to me a most surprising animal. That a hybrid should possess more reason, memory, obstinacy, social affection, powers of muscular endurance, and length of life, than either of its parents, seems to indicate that art has here outdone nature.”

You’ll need to know basic terminology when buying a mule.

For example, you might hear someone say, “I have a dun molly mule for sale.” “Dun” describes its tannish/brown coloration with a donkey-like stripe on the shoulder. Much like horses, mule color varieties can be diverse. Mule colors are sorrel (red), bay (reddish or brown), black, gray, white, and dun (light brown or tan).

There are also mules with multiple color variations, especially if the mare was a paint, Appaloosa, or pinto. Training terminology is best understood before buying a mule.

An “unstarted mule” is just that, it hasn’t been trained at all.

A “halter broke” mule has had a halter on it and will lead. Some mules have been halter broke and can be saddle’ but have never been ridden.

A “green-broke” mule has been halter broke, had a saddle on it, and a rider. It’s in the beginning stages of being safe to ride.

A mule that can be safely ridden is often described as “saddle broke.”

You’ll want to get an idea of how much the animal has been ridden.

Has it been on trail rides? Has it ever carried a pack? Is it skittish around certain things?

You’ll also have to decide if you can trust the seller. Any good salesman knows that sometimes the truth doesn’t sell, but you’ve got to find a way to navigate through the fluff to get accurate information. I suggest not buying an animal, no matter how good it looks, if you don’t have a good feeling about the seller. I like to buy from people who aren’t afraid to tell me the animal’s faults, because every animal has them.

Ask the seller outright, “What are the animal’s faults?” If they say it doesn’t have any, then I’d be suspicious. The height of equine animals is described in “hands,” where 1 hand equals 4 inches. Sometimes “hand(s)” is abbreviated as “hh” for “hand high.”

Most mules are between 13 and 15 hands tall. A 13-hand mule is a smaller animal, and one over 15 is tall. My mule is roughly 13.5 hands. I don’t like a tall mule because I’m typically riding in timber and don’t want to duck limbs constantly. It’s also easier to get on and off a shorter mule.

What to look for in a mule

I’ve learned that you can’t always take the owner’s word at face value when buying a mule, because every owner has different standards.

Some people aren’t great communicators. Some owners don’t know their mules as well as they think they do, and unfortunately, some people are dishonest.

For each mule that I bought, I initially asked the seller why they were selling the animal. Were they trying to get rid of a “problem mule”?

People often develop a bad habit in an animal and then want to get rid of it, so it’s a possibility to consider. The mule’s disposition is the most critical component to discern.

Is the mule easy to catch, or does it run away when it knows you want to catch it?

Does it let you touch it, or is it afraid of you?

How does the animal react when you put a halter on it?

Does it pull its head away or put up a fight?

Mules are typically skittish around strangers, but you can get a general idea of how spooky it is by watching the owner interact with the animal.

When buying a broke or green-broke mule, ask the seller not to saddle the animal until you arrive. That way, you can watch the animal as it’s saddled. Is it spooky, or does it stand still? Look for nuances in the way the seller acts around the animal. You’ll learn something. 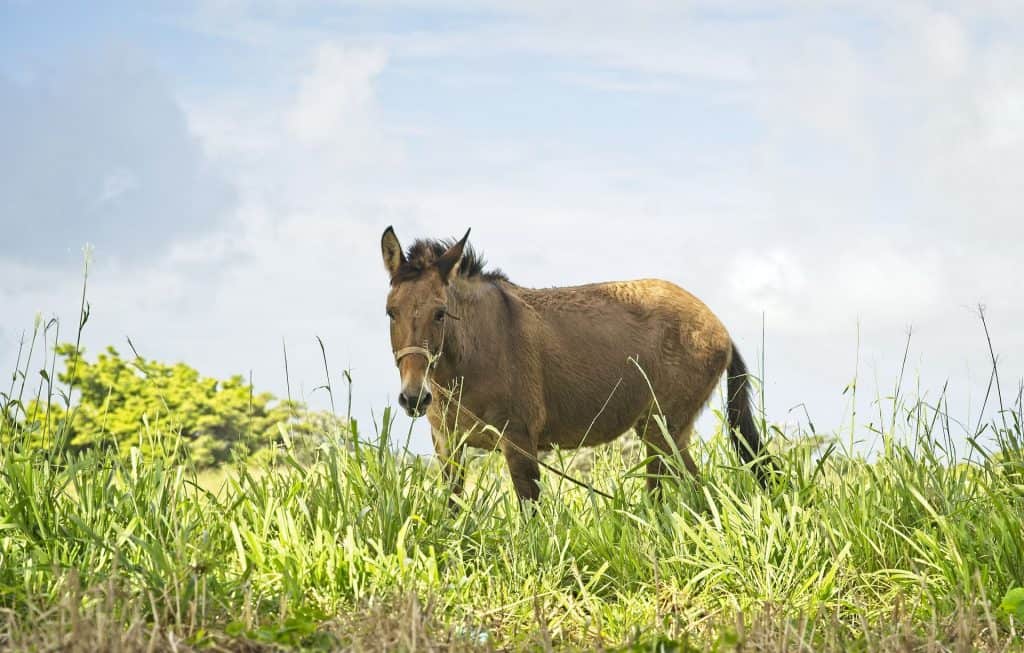 You can typically buy an unstarted mule foal for less than $800. You might pay more for a well-bred, nice-looking foal. A mule’s beauty does affect its price.

A green-broke mule will be anywhere from $800-1,500, depending on its looks, breeding, disposition, and training development.

A saddle-broke mule can be anywhere from $1.500-10.000. Most well-broke saddle mules will cost $2,000-3,500. This mule would’ve been ridden on trails for years, been in all kinds of situations. It is able to be ridden on the road around cars, is easy to load in a trailer, and safe enough for a child to ride.

Typically, a mule wouldn’t be this well trained until it was 8 to 10 years old or older. For a mule to be truly broke, it needs 300 miles of trail with a rider on its back. With this much exposure, it’s seen a lot of things, been spooked many times, and has learned a lot.

I paid $700 for a lightly started, green-broke dun molly mule. I’ve been riding her, and she’s coming along. However, she’s still spooky and has a bad habit of running when she’s scared.

My second mule is a sorrel paint molly mule. She’s 18 months old and is totally unstarted. I’ll be training this mule for the next year. I traded an older four-wheeler for this mule, which was equivalent to a $1,500 trade.

Why did I pay so much for an unstarted mule?

I really liked the way the animal looked, and I medically wanted one that I could train myself. Often, this is better than getting a mule that somebody has already messed up.

To understand mules, it helps to know the strengths of both parents. The modern horse, in many ways, is a man-made animal. It’s been highly influenced by thousands of years of breeding programs. 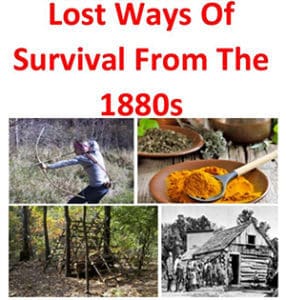 Horses are fast, large, strong, beautiful, intelligent, easy to train, and comfortable to ride. The drawbacks of horses are that they can be too fast, not surefooted in rugged terrain, and have a greater tendency to hurt themselves in precarious situations.

They’re often harder to keep healthy than a mule or donkey. They need more feed, and most must be shoed, which is a bimonthly expense.

A donkey is smaller than a horse, extremely intelligent, strong for its size, and maintains a very even keel when under pressure. They’re extremely surefooted in rough terrain. They’re easy to keep healthy, and they can live off grass and brambles throughout their lives.

Donkeys have very tight and small hooves that don’t require shoeing. The drawbacks of donkeys are they’re small, slow, uncomfortable to ride, and can be obstinate. They aren’t considered elegant or beautiful by many.

By breeding a mare horse and a jack donkey, you get the positive attributes of both parents in a single animal. In some ways, you get even more.

Mules come in all sizes: small, medium, or very large. Much about the size of a mule depends on the size of the mare. Pound for pound, mules are the strongest equine animals. They’ve got greater endurance than both of their parents.

Mules typically have hooves like a donkey, so their feet don’t need to be shoed. They’re extremely surefooted in rough terrain, and they’re much faster and more comfortable to ride than a donkey. It’s also easy to keep them healthy (you’ve probably heard the phrase, healthy as a mule).

Mules can live longer than both of their parents, with lifespans as long as 50 years. Mules are extremely Intelligent and known for their ability to preserve their own safety, which translates into safety for the rider. 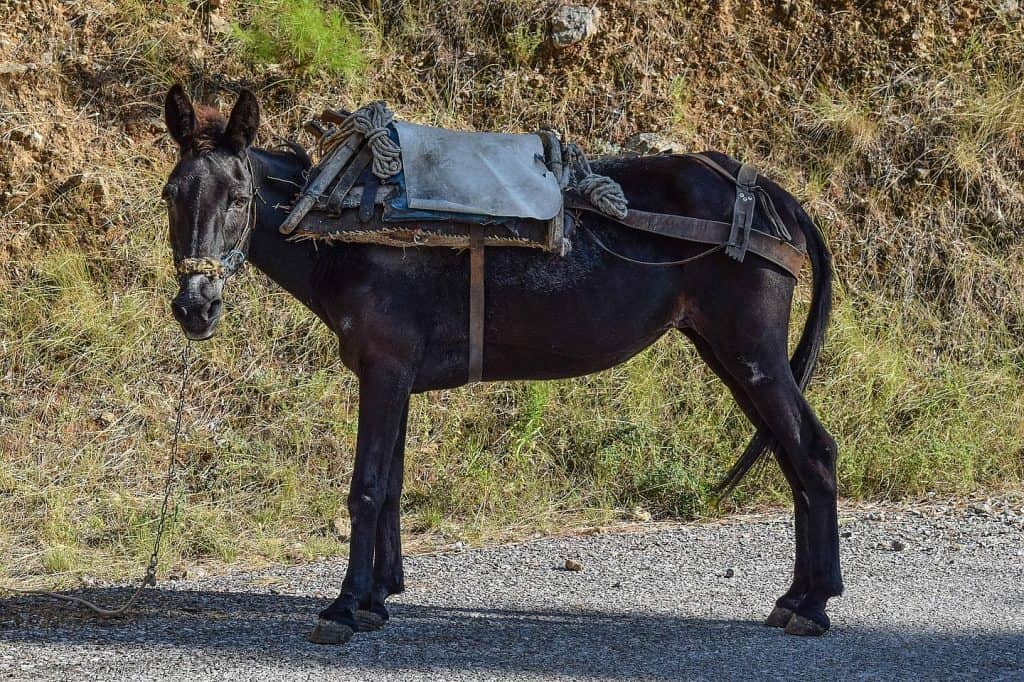 Ask the seller if the animal “neck reins” or “plow reins.” Neck reining is the Power steering of equine animals. While holding the reins in one hand, you move them in the direction you want to go. The rein touches its neck on the opposite side you want the animal to move, and it goes in the correct direction.

In plow reining, you pull the animal’s head in the direction you want it to go. and It applies pressure on the bit (In the animal’s mouth). Neck reining is generally considered better, but it isn’t a deal-breaker. A plow-reining mule can be trained to neck rein. Most mules will only plow rein.

A mule’s beauty is in the eye of the beholder. Look at pictures online of mules to understand what a good one looks like. Tall ears; muscular build; good, tight feet; beautiful coloration, and a handsome face are notable attributes. You’ll pay more for a flashy mule.

Mules reach physical maturity after they’re 5 or 6 years old. Typically, a seasoned mule is over ten years old. It’s not uncommon to see 15- to 20-year-old mules for sale. If the price is right, that’s not necessarily a bad purchase; however, there are also many years to potentially develop bad habits.

When you buy an older mule, be sure you get the full story. You might even talk with the seller about buying it after a trial period.

Get a Good One

Mules are amazing animals that are very different from horses and donkeys. Humans have used them for thousands of years. If you train one correctly or buy a good one, you won’t regret it; you’ll have safe backcountry transportation for decades.

Suggested resources for preppers and homesteaders:

Source
A Few Reasons To Get A Mule For Your Homestead is written by Bob Rodgers for prepperswill.com